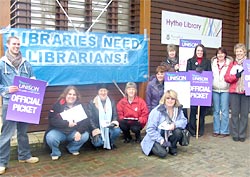 18.5 professional Librarian posts lost in Barnet, no specialist Reference Librarians in Havering and Enfield Libraries and this is only the tip of the iceberg, an article recently published in the Richmond and Twickenham Times highlights the concerns;

"Mr Hancock wrote: “More than 10 library staff took voluntary redundancy and a wholesale turnaround of staff ensued."
“I hate to think of all the experience built up over a number of years that the library has lost, not to mention the local contacts and community involved that has been curtailed.”

According the latest figures an estimated 2159 library posts have been lost this financial year but many more Librarians have been downgraded due to service restructurings and many library staff have been pushed from pillar to post in forced moves. All this upheaval has a negative effect on staff morale and motivation and will surely ultimately lead to a poorer service. And cutting opening hours only adds fuel to the fire as a recent post on the 'We Heart Libraries' site shows.