'We're on a road to nowhere'; Welcome to Croydon Libraries!

Interested in the current privatisation process that Croydon is undertaking with Wandsworth I wanted to see the library service for myself. Croydon library campaigner and local library user Elizabeth Ash offered to show me a few...

The first library we visited was Broad Green Library. 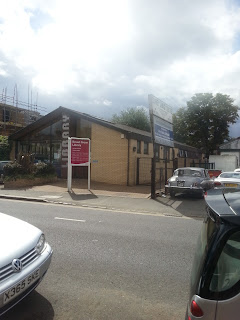 The library building itself is not very attractive, a bit like a garage or warehouse and is situated in an area resembling an industrial estate! The signage on the front of the library was good but the community notice area was very cluttered and messy! The other thing i noticed is that the library closes for lunch, usually a sign that staffing is short! Apparently this is the case in several Croydon libraries, and has been for some time. http://www.croydon.gov.uk/leisure/libraries/cl-opening-hours

The library was very busy, full of kids and parents signing up for the 'Book Trail' which only two volunteers wearing red t-shirts appeared to be administrating. There were only 3 library staff behind the desk, which is probably why they close for lunch! 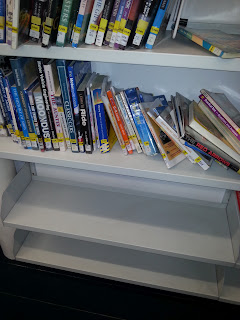 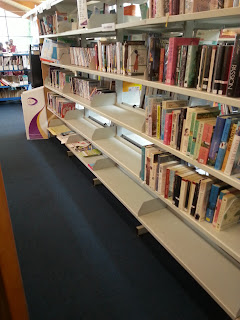 The general feeling inside was rather chaotic and the half empty shelves (see photos above) where very messy, never a good sign as tidy shelves are always a sign of a well managed and cared for library! There where also a few public PCs out of order and from the way they had just been dumped at the side it looks as if they've been this way for some time? Residents were able to confirm this was the case. We moved on to Thornton Heath Library which has a new facade which in my opinion doesn't blend in with the original building, but apparently it's a work of art!

﻿
Inside, the library is attractive, bright and clean with new shelving and lots of nice places to sit, the complete opposite of Broad Green Library!

There where 3 self-service kiosks and two staff in the main library. Staff were actively encouraging library users to use the self service machines. Yet again the shelves where untidy with books just lying on top of others and totally out of sequence and also not very full, very worrying! The shelf signage was also very poor, how are the public supposed to find what they're looking for with bad or virtually non-existent signage! 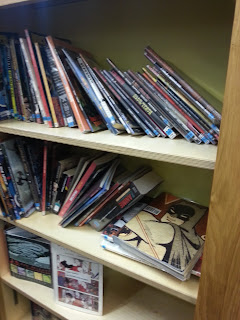 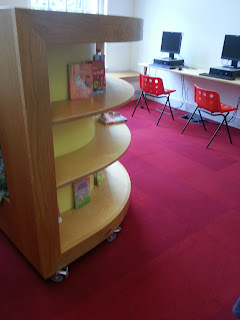 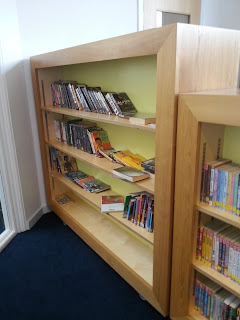 another shelf in the teen section!

The IT suite, which is situated downstairs with the children's library, was empty, surely this should be one of the most heavily used parts of the library? Again some of the PCs were out of order. None were on.
The children's library was fairly busy due to the 'Book Trail' but only one of the volunteers had a red t-shirt on, so how are the public supposed to differentiate between them and the library staff, which might not be a problem due to the fact there where no library staff present anyway! More worryingly though, how were the children, some of whom were unaccompanied, supposed to distinguish between those adults there as official volunteers and any adult who happened to wander in and take a seat? It begs the question whether child protection is being taken seriously by Croydon! We where also told by some of the parents that no new books had been made available for this years 'Book Trail', a great shame and hardly a challenge!
In previous years librarians had worked up a set of questions on all the books in the Book Trail to help staff and volunteers to engage with children and ask pertinent questions at differing levels. Parents reported that volunteers didn't have specific questions on many of the books this year so often just marked that books were read, with little engagement, The Book Trail was so short of books that children were also being told that they could read any book. This was also the case in Broad Green and the general consensus from parents and carers we spoke with was that it was nothing like the standard of Book Trail from a few years ago.
Our last stop was the Central Library. The Library is arranged over 3 floors and covers a large area. The first thing to mention is that there where no self-service kiosks and only 6 staff visible in the public areas, no wonder there was a lengthy queue at the main desk and on service desks on other floors! Yet again the shelves where generally untidy and some half empty, there where also 2 stacks and 5 trolleys of returned books waiting to be shelved, a sure sign of short staffing! 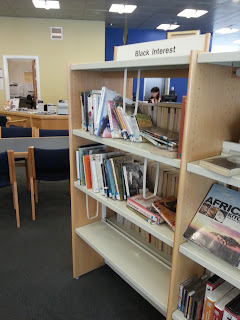 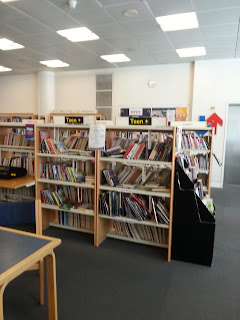 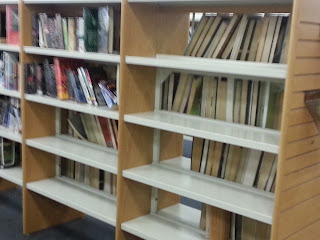 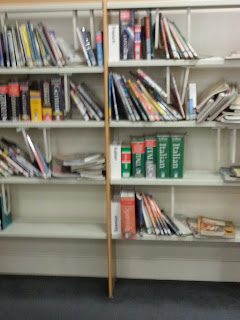 The Reference collection upstairs was very well stocked and up to date especially in the areas of law and careers with a few students sitting using the resources but generally the library was very quiet for a Friday afternoon!

In all three libraries we spoke with users. Most were aware that there had been a consultation but they understand the outcome of it was that the libraries were saved and some were not even aware a conclusion to the consultation had been announced. None we spoke to however were aware of Croydon's decision to outsource the whole network and most found this very concerning.

Croydon Library Service, in conjunction with Wandsworth, is coming towards the end of a procurement process which could lead to privatisation and it looks as if JLIS, the company who run Hounslow Libraries, are the main contenders and i have heard from campaigners that this is why they suspect that the shelves are half empty and untidy, they're short staffed and events are not being publicised or organised properly? If this is true, and i have no reason to doubt it, then it is an absolute disgrace, surely the people of Croydon deserve more!