I worked for Hackney Libraries from the early 90's to early 2000's, for 11 years to be exact. In this time i witnessed the service drop from 14 to 7 libraries, the arrival and departure of 5 Heads of Service and as many restructurings, the closure of the old and better Central Library and the opening of a new one that didn't work, the downgrading of staff, pay and terms and conditions, the loss of specialist staff, the destruction and selling off of numerous reserve stocks and special collections, a strike that lasted a year and generally the hollowing out and running down of the service!
Since i left about 8/9 years ago things have gone from bad to worse, not just because of my departure, with 25% of the workforce made redundant, the recruitment of a 'volunteer co-ordinator' and the service in disarray, so has the opening of a new library in the area been a positive development?

The new C.L.R. James Library was opened this year, it replaced a library of the same name that was demolished roughly in the same location in Dalston Lane. 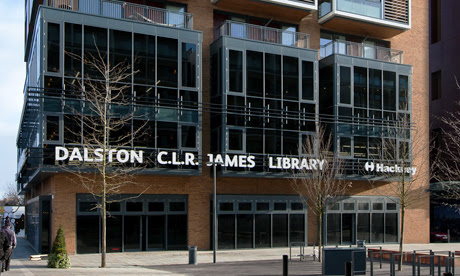 It cost 4.4m to build and is part of the wider regeneration/gentrification of the area.

It's housed in a very modern, shiny, glass, and nondescript kind of building, a bit like the majority of new libraries built in the last ten years, but at least it has the word 'library' on the front which is a bonus nowadays!

As you enter the front doors, on the ground floor, straight in front of you is the 'quick picks' area staffed by a single person with a couple of self-service kiosks and to the right a cafe. It does seem a bit of a strange to put a collection of 'quick picks', whatever that means, downstairs away from the main area, wouldn't it be better to draw people into browse the full collection, or are people really that busy? Maybe someone can explain this concept to me?

On the 1st floor there is the main adult lending area, the children's library and a 'teen section'. In the main adult area the shelves where not only half full with new shiny books but where untidy, which usually implies short-staffing or bad management or both! I have heard from very good sources that new books from the other libraries were removed from their shelves and shipped over for the opening of the new one to make it look better! There where two staff and two self-service kiosks in this area and one member of staff and two kiosks in the children's library, which also had half empty and untidy book shelves! This floor was surprisingly empty of users for 3pm in the afternoon during a school holiday period!

On the 2nd floor there is a study area, which was quite busy and a smallish 'quick reference' section, this area as far as i could see was unstaffed. The Local History Archives is also housed on this floor but i didn't venture in!

The old C.L.R. James Library was lively and had lots of community spirit, the new one lacks atmosphere and is sterile, a great shame!
Posted by Alan Wylie