Sold to the highest bidder; a trip to the Public Sector Show!

I had a day off today and as you do on your precious days off with the sun shining i toddled off down to the Business Design Centre in Islington for the Public Sector Show. Unfortunately (or fortunately as the case may be) due to other committments i could only stay for the morning session.

"The Public Sector Show is the only event of its kind designed specifically to address the challenges and issues the public sector, in its entirety, currently faces. The Show is new and FREE TO ATTEND for everyone from the public sector, charities, social enterprises and voluntary organisations."

The session i attended was entitled 'Public Service Mutuals: what they are, why they work and how they can work for you' and was introduced by a bright young career minded thing from the Cabinet Office. According to the bright young thing "Mutuals are unleashing a wave of entrepreneurialism and innovation across the public service landscape, enabling staff to own and improve the services they deliver free from the constraints of government control." The first part of this statement, up to and including 'entrepreneurialism' is undeniably true but the second part highly debatable!
The bright young thing then introduced a CEO from a Swindon based mutual which took over the management of community health services in the area, she was very evangelical about the benefits and finished by saying that "staff had been liberated by the change" and now had the "right mindset to deliver a public service that was also a business"! She also said that "the non-profit tag is a misnomer, you have to make a surplus" Hallelujah!
The next speaker was a slightly more canny Senior Commissioning Manager (or something like that?) from a south east authority who talked of a "roller coaster ride" and having a way out in case the plan failed, he also proudly announced that he had personally overseen the outsourcing of 700 jobs to Capita, give that man a knighthood!
Libraries were mentioned as a "growing sector for mutuals".

After the seminar finished i wandered around looking at the shiny people and baubles and had a word with someone at the 'Social Enterprises' stall who looked at my entry badge which had 'Alan Wylie - Library Campaigner - Voices for the Library' in big black bold letters emblazoned on it and said "oh dear so what do you think of GLL then?" to which i replied "well i suppose they might be better than JLIS or LSSI but only just, we'll need to wait and see" and "I'd rather Greenwich and Wandsworth Libraries had been kept in house", she smiled awkwardly, handed me a free pen and fled! 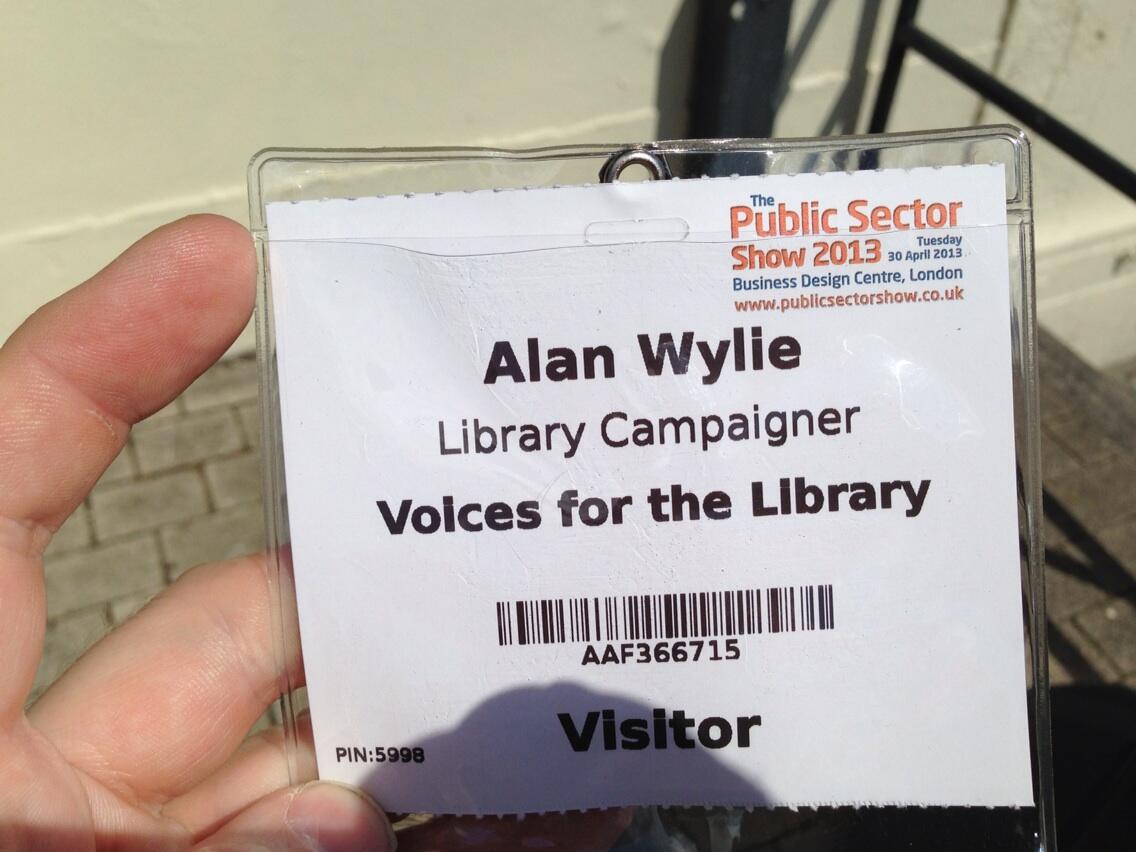 The whole event was weird, like a cross between a car show and the film 'The Tin Men'! I've never seen so many suits in the same place at the same time, the men wore them, the women wore them, in fact the only person that didn't was me! The other strange and worrying thing was that every exhibitor stand had at least one dyed blonde haired woman standing by it, this was obviously to attract the packs of male management types swarming around, how sad and outdated. Is this what the Public Sector has become, a marketeers freak show full of shiny suits, dyed blonde hair and freebies? What happened to our integrity and ethos, has it like everything else been sold to the highest bidder?

So i departed with a bag full of freebies, a stomach full of free cinnamon rolls, black coffee and my ears ringing with tales of "entrepreneurship" and having the "right mind set", feeling soiled and used!
Posted by Alan Wylie