The 2012 Speak up for Libraries Conference; An inspirational day!

I'd like to start by thanking Aaron Hussey and the CILIP team for being brilliant on the day also the Library Campaign, especially Elizabeth Ash, for all their hard work in helping to organise the conference.

The day started with an inspiring speech by Phil Bradley, CILIP President, Phil started by talking about the role that libraries played in the recent storm in the US, they helped to galvanise communities and how library staff acted as a life line too many. He then went all R.D. Lankes on us by talking about how our role as library staff should not be just the keepers of artifacts but should be based on outcomes, actions and embedding ourselves within communities!

Then we had a rebel rousing speech from Alan Gibbons, in which he spoke about the wider picture and how we must debunk the austerity myth. He also reminded us that we (activists, campaigners, union members et al) have by our collective actions made a difference, the situation could be a lot worse but we still have a hard battle in front of us and how we need not to just SPEAK but SHOUT up for Libraries!

Helga Pile from UNISON then gave a very useful and practical presentation on the current legislative and political situation surrounding the governments 'Open Public Services' agenda, talking about procurement, outsourcing/privatisation and so-called 'localism'.

We then split into our workshops and I along with Hannah Bailey, from UNISON, led the one entitled 'Privatisation - a foregone conclusion?' I must admit that I was a bit nervous as I'm a new comer to public speaking and have a pathological fear of 'Powerpoint', also Diana Edmonds, and colleague, from GLL where present! I started by giving an overview of the current UK situation and learnt from Diana Edmonds that GLL hadn't bid for the now dead Wokingham contract, something due to a lack of transparency I had just assumed! I then handed over to Hannah who gave a very informative presentation on the procurement process something she confesses to having a passion for, we suggested therapy! Hannah's thrust, and in fact the main thrust of the whole day, was based on how activists/campaigners and users can get involved in the process in order to influence or halt it. The workshop was repeated in the afternoon and we had in that session a very passionate and interesting discussion about the situation in Barnet and the wider political and economic situation thanks to Bali Rai and two of the Barnet campaigners. The message from both sessions is that privatisation is not a foregone conclusion and that we have to highlight the failures and successful campaigns such as Edinburgh, Cornwall, Wokingham etc and the wider picture! 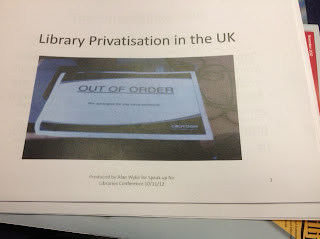 At 1pm we had a well deserved lunch and an opportunity to put names to faces.

After the afternoon workshops we had a summing up session which was hosted by Abby Barker who I must say is a natural, and should be in my opinion going on 'I'm a Celebrity' rather than Nadine Dorries! (Disclaimer time! I would just like to make it very clear that i have never watched or have any future intentions of watching the aforesaid reality TV show, and if anyone suggests that i have or intend to then I will take it as a serious defamation of my cynical, grumpy Marxist character!)

Now came the bit we had all been waiting for, the speeches by the authors and library campaigners Bali Rai and Philip Ardagh (he of the Pre-Raphaelite chops!). Bali started off by talking about his background and why libraries where and still are so important to him, he talked about their role in inspiring kids and improving literacy and empowering communities, a truly inspirational speech. He then handed over to Philip who told us that he had inherited his facial hair from his mother and his love of all things 'Narnian' from his dad! He then talked off his hatred of self-serve kiosks and his love for professional librarians, something that got a cheer! Alan Gibbons then gave us a short rousing send off!

It was exhausting but inspirational and really gave many, if not all, of us hope and  a renewed energy to continue the fight. I feel very privileged to have spent the day with so many people who are passionate about and committed to saving libraries.
Posted by Alan Wylie

Email ThisBlogThis!Share to TwitterShare to FacebookShare to Pinterest
Labels: Speak up for Libraries