On the 31/01/13 the Society of Chief Librarians (SCL), the local government association for Chief Librarians in England, Wales and Northern Ireland announced the 'Universal Offer' for Public Libraries, the four 'offers' are Health, Reading, Information, and Digital.

"the four service areas which modern users regard as integral to public libraries."

This "vision for the future of public libraries" has been developed in partnership with the Arts Council England, The Reading Agency and the DOH.

"The new national approach will, for the first time, clarify what the public should be able to expect from their library."

This has all got to be taken in the context of the SCL backing the government initiative 'Race Online' in 2010 (now 'Go On UK'), the publication of the evaluation of the proposed 'Public Libraries Information Offer' in June 2012 and the SCL report 'The new super-users of Britain's public libraries' published in Dec 2012 which they claim to have identified as;

One glaring omission 'Fiction Readers', by far the biggest users of public libraries, but it's not trendy to focus on books in libraries unless it's the rise in the issues of children's books or the ebooks dilemma! 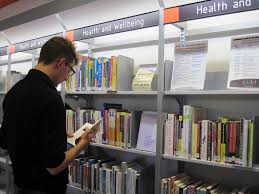 So back to the 'Universal Offer', what's wrong with an initiative that talks about "where libraries can provide real value to local people and where they will be working collectively to deliver impact in difficult times." I hear you ask? Well let's start to unpick the spin a little!

This is championed as a national universal offer but how can it be with the fragmentation and post code lottery of a service that we now find ourselves with? Most authorities have 'community libraries' in one form or another with no consistency in the service offered, some authorities have privatised the service, some have created models along the lines of IPS, co-ops and trusts and nearly all have 'hollowed out' the service which means there are far less staff (2000-3000? cut nationally with at least 562 cut in London alone) and less resources available than say 2-5 years ago! So with very little consistency in the service offered and a lack of staff and resources to offer it how successful is this 'universal offer' going to be?

Let's look in detail at three of the four offers themselves;

Health - The SCL claim that the 'Books on Prescription' scheme is a new offer when in fact it's been around for some time and although it's claimed that this is to do improving the health and well being of the community i suspect it's more to do with plastering over the cuts made to local NHS services in the same way that patients are encouraged to go to the pharmacist for minor ailments because GP surgeries can't deal with an increase in demand with a decrease in resources!

Information - What really worries me about this is the fact that the number of specialist information and reference staff has been drastically reduced with some authorities not employing any at all, so who is going to oversee and cascade this out to an ever decreasing number of branch staff? With the push towards the 2015 e-gov targets and the introduction of the online 'Universal Credits' system, library staff are going to be struggling to deliver anything but a basic level of service with very little time to spend guiding users/members through a maze of official government information or the time needed to assist a claimant navigate a 'Kafkaesque' online benefits system!

Digital - The same concerns as with 'Information' but with the added problems of an increasingly decrepit ICT infrastructure in libraries, corporate ICT policies/structures blocking development and innovation and a decrease in training budgets leading to fewer staff being properly trained to assist the public leading to an inconsistency in the quality of service provided and of course fewer paid staff to do it all!

So all in all some good ideas lauched too late with too little staff and too few resources!

But don't worry according to Vaizey;

“The public library service is in good health"

And Janene Cox, SCL President, gives our morale a much needed boost by stating;

"In the jargon of today, libraries must do more, or the same, with less"